Hear their story Then ask yourself:

Why is the college whose motto is "Expression Necessary to Evolution" silencing their students?

FIRE is working hard to restore KJ and Sam’s right to free speech at Emerson, but we need your help!

Emerson College students KJ and Sam criticized the Chinese government by handing out stickers reading: “China kinda sus,” but the totalitarian regime that silenced them was much closer to home. Emerson investigated and punished their student group. To this day, administrators refuse to restore their rights. 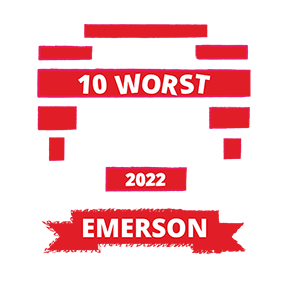 BOSTON, Nov. 16, 2021 — Criticizing a foreign government is a serious offense at Emerson College. That’s the message Emerson’s administration sent on Friday by denying the appeal of a conservative student group that passed out stickers critical of the Chinese government.

“Emerson’s actions from start to finish are extremely worrying,” said Sam Neves, president of Emerson’s Turning Point USA chapter. “They’re trying to bully us into submission, and we will use all the tools at our disposal to make sure they won’t. They can’t cancel us if we don’t let them.”

After Emerson initially suspended the campus chapter of TPUSA for distributing the stickers, Emerson’s conduct board found the group responsible for violating the school’s “Bias Related Behavior” policy and issued them a “formal warning.”

“FIRE is issuing a ‘formal warning’ to Emerson,” said FIRE attorney Adam Steinbaugh, who wrote FIRE’s initial Oct. 5 letter to Emerson. “Emerson violated its own promises by making it clear that speech criticizing foreign governments will not be tolerated if it angers supporters of those states. Authoritarian censorship should be rejected, not embraced, by any institution committed to freedom of expression — as Emerson claims to be.”

On Sept. 29, several TPUSA members passed out stickers featuring a hammer and sickle with the caption “CHINA KINDA SUS” — slang for “suspicious.”

Under pressure from other student groups, including the Emerson Chinese Student Association, which accused TPUSA of anti-Asian bias and xenophobia, the college launched an investigation into the group. In an Instagram video, the TPUSA chapter said the stickers are critical of the Chinese government, not the Chinese people.

This is a fact that Emerson acknowledged in its decision to charge the group with bias — a decision that FIRE condemned in a second letter to the college on Nov. 10.

In its disciplinary findings, Emerson concluded that TPUSA “did not intend to target anyone other than China’s government.” But the university’s conduct board still found the group responsible for creating “a hostile, intimidating or offensive working, living or learning environment” after another student came forward and said that the stickers had negatively affected her experience on campus. Emerson put a “formal warning” on TPUSA’s record, and the group had to cease handing out the stickers.

“They’re punishing us while acknowledging that we are innocent,” Neves said.

The students appealed Emerson’s decision. On Nov. 12, Vice President and Dean for Campus Life Jim Hoppe denied the appeal. This means TPUSA needs to tread carefully, because another violation of Emerson’s policies would carry harsher penalties given the prior warning.

Emerson’s decision to punish the group despite the facts shows the school’s utter disregard for its own free speech promises. Emerson’s Statement on Freedom of Expression touts “the high importance” of the First Amendment on campus and “encourages students to present ideas, express their individuality and culture, and be open to thoughts or life styles that differ from their own.”

“Emerson administrators think they only silenced TPUSA, but this decision will have far-reaching effects,” said Steinbaugh. “By trampling the expressive rights of a few students, they cast a chilling effect on the speech of all Emerson students.”

The Foundation for Individual Rights and Expression (FIRE) is a nonpartisan, nonprofit organization dedicated to defending and sustaining the individual rights of students and faculty members at America’s colleges and universities. These rights include freedom of speech, freedom of association, due process, legal equality, religious liberty, and sanctity of conscience — the essential qualities of liberty.